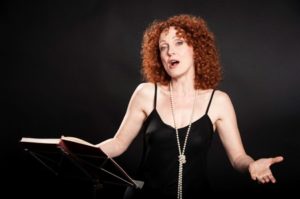 Mezzosoprano, Mya Fracassini studied singing at the  Scuola di Musica di Fiesole, and then obtained a diploma in opera singing at the conservatorio G.B. Martini in Bologna. She then specialized in lieder and obtained a diploma in vocal chamber music and Renaissance poliphony at the Conservatorio L. Cherubini in Florence and Conservatorio T. Schipa in Lecce. She has followed masterclasses with C. Desderi, J. Feldman, A. L. King, M. Chance, G. Banditelli. She obtained a Laurea at the Università di Bologna (DAMS). She has also studied Voice training at the same University. Her final thesis has been awarded as the best work in the didactic field of study.

She works in various fields that include medieval music, Renaissance poliphony, sacred and secular baroque repertoires, chamber music for voice and piano, and modern and contemporary repertoires.

Her vocal and musical versatility allows her to perform musical programs that cross over different epochs and styles, a characteristic of her perfomances that has been always widely appreciated.