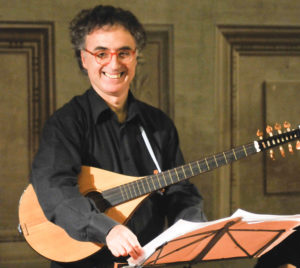 Gian Luca Lastraioli was born in Florence. Aftering obtaining a diploma in Renaissance lute at theConservatorio F. E. Dall’Abaco of Verona and a degree in Musicology at the University of Bologna, in 1982 he started his professional career as lutenist and theorbo player. He has participated in many concerts and early music festivals in Italy, France, Germany, Switzerland, the Netherlands, the Check Republic, Poland, Portugal, Spain, Israel, Great Britain, Denmark, Norway, Belgium, Brasil,  the USA, New Zeland, collaborating with numerous specialized ensembles in the medieval, renaissance and baroque repertoires.

Gian Luca Lastraioli has recorded over fifty early music CD’s with some of the most prestigeous European recording labels. Among the most significant recordings as lutenist and conductor are the first complete recording of the Suites Medicee by the Florentine composer Lorenzo Allegri, the first world recording of L’Aurora Ingannata by Girolamo Giacobbi, the first monographic recordings dedicated to the compositions of Enrico Radesca, Francesca Caccini, Carlo Milanuzzi and Cosimo Bottegari. This last recording has been definied by critics as “a real theatre of emotions through which Lastraioli wonderfully sheds light on one of the most extraordinary periods of music history”.

Since 2007 Gian Luca Lastraioli is the director of the Cappella di Santa Maria degli Angiolini with which he curates recordings and performances of unpublished Italian music of the XVI-XVIII centuries.

He is currently lute and continuo professor at the Conservatorio di Musica A. Boito of Parma and at the  Scuola di Musica di Fiesole. He has been invited to teach at James Madison University (USA), at Pepperdine University (USA) and at the Universidad Federal do Paraibo (Brasile). He has conducted workshops on lute and ensemble playing all over Italy and in Great Britain.

In 2012 he has been selected to become the conductor and artistic director of the European Lute Orchestra, an ensemble that brings together approximately 40 lute players from all over Europe.