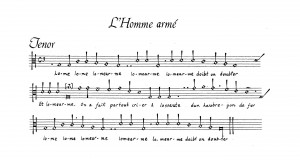 “No one knows how and why the melody l’Homme armé became the basis of so many masterpieces of Renaissance polyphony. We do not even know what kind of melody it is. It is generally considered a  melody of the people which was also very popular and that was widely know orally. Another theory though, states that it originated as tenor of a polyphonic prototype, maybe a court song from Bourgogne. Just as mysterious is the meaning of the text. Who is this “armed man?”

the candiates that have been considered are Henry V of England (who defeated the French at Agincourt in 1415), Charles VII of France (the Victorious who reigned from 1422 to 1461) and Charles the Temerarious, the last Duke of Burgundy.” (Taruskin 1980)

On this website we use first or third-party tools that store small files (cookie) on your device. Cookies are normally used to allow the site to run properly (technical cookies), to generate navigation usage reports (statistics cookies) and to suitable advertise our services/products (profiling cookies). We can directly use technical cookies, but you have the right to choose whether or not to enable statistical and profiling cookies. Enabling these cookies, you help us to offer you a better experience.